Memorable memories since the Edinburgh Lace Course began in 1981.

The year at Pollock Halls when the weather was scorching and Arthur’s Seat went on fire. We had a good view of this from the workroom – very exciting!

That may have been the same year that we were joined in the Halls, towards the end of the week, by pipers preparing for a pipe band championship. The hot weather meant the pipers were able to practice outside but also meant we needed the windows open. Individual pipers practicing standing facing a wall and going over and over bits of tune wears thin after a bit!

For those resident Pollock Halls was a noisy place because all doors were on ball catches and no rooms were en suite in those days. But particularly disturbing was a group of visitors who were knocked up for prayers at 5am every morning. The knocker up must have had quite a shock when confronted with an irate Kath King(tutor) resplendent in her dressing gown.

For those who lived in at Pollock Halls there was constant entertainment at breakfast time. People who had paid for bed and breakfast were allowed a specified number of items for their breakfast. However most of the tourists took the chance of stocking up for the day and took extra cereal boxes and plenty rolls. What they did not expect was the servery police (!) who stood at the exit to the servery removing the extra food! Unkindly the looks of bewilderment and dismay as people saw their treasures being removed were a source of great entertainment to us.

Fortunately at Pollock Halls we never had a fire alarm but Heriot Watt has made up for this! We have now had two day time alarms and two in the middle of the night. No-one really appreciates being woken at 4am and having to stumble out into the fresh air – very sociable though as there is nothing to do but stand around chatting till the fire brigade arrive. Happily none of the alarms has been caused by a serious fire – mostly malfunctioning sensors so it has not been traumatic. 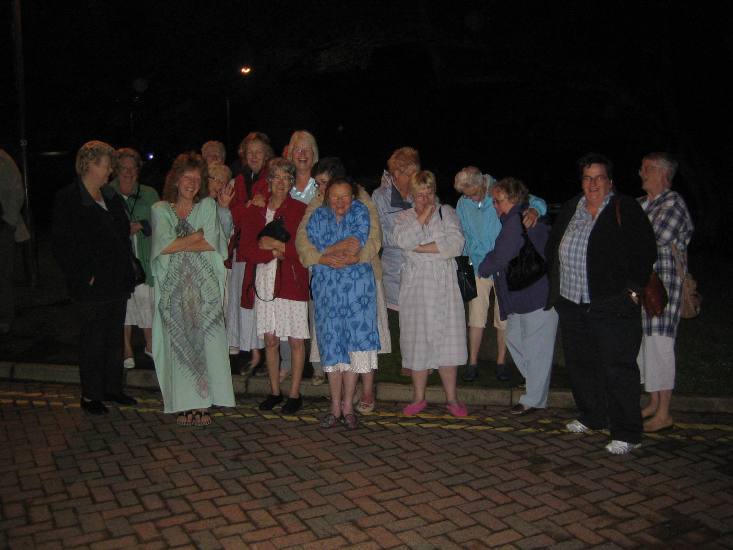 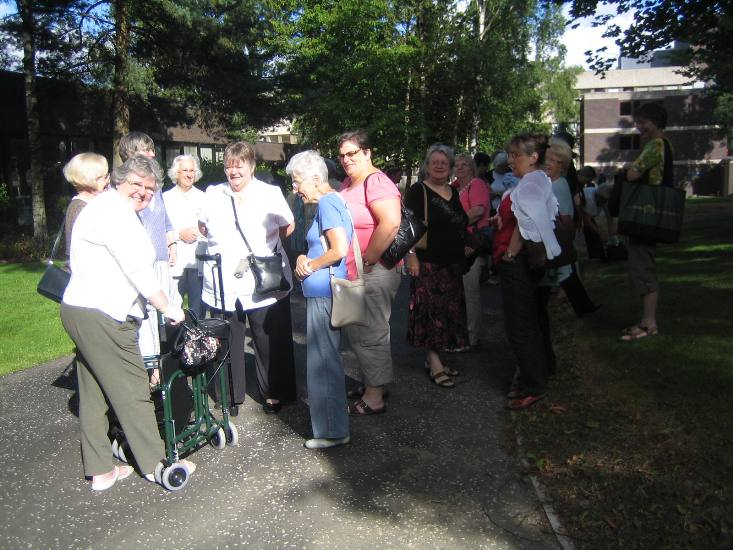 In our second year we started a children’s class, minimum age 8 years old. This ran for quite a number of years, taught by Kitty. The composition of the class changed over the years and for a couple of years at Heriot Watt you could have been forgiven for thinking it was a gymnastics class rather than one for learning something sedentary like lace! Handstands became the order of the day – not for the teacher it has to be said!

The most physically active child at that time was not exactly commited to lace and when asked what pattern she wanted to make said – ‘a banana with feet’! This felt like a challenge. So a banana with feet was duly designed and she made it! It looked quite good too.

Kitty’s 8 year old nephew Andrew joined the class for a couple of years – another who needed physical activity – so she kept sending him out to run round the Heriot Watt building. he always seemed out of puff when he returned so she assumed he did do it! He made a lace dragon as well so all was not running about.

Tunes on the pins

His sister Anna started in the first class and attended for a number of years. She had a habit of getting her bobbins in a tangle – this developed a new term – doing an Anna! She may not have required physical activity but she did have pensive moments – in one of these she discovered she could play tunes on her pins – depending on how far they were pushed into the pillow they twanged a different note!

Just read what I have written!

When the number of children was too small to have a specific class the children were added into an adult group. One year we agreed to have Alicia who was only 6 and a half. Kitty did not quite get her head round Alicia’s age and doing her usual diagrams and written notes left Alicia to follow them. It never occured to her that of course Alicia could not read! Back to the drawing board – as they say.

Other conferences and groups we have shared with

Over the years at Heriot Watt we have shared the venue with a number of conference and groups – some more interesting than others. We have shared with the Open University – perfectly nice people but we were not impressed by their end of week party which went on till 4am in the lounge of the residential block!

We were a little unsure about the world conference on Herpes! We were fascinated by the ‘Health and the Sex Industry’. During this one a number of lacemakers were sitting at a table outside the bar (the bar itself being very busy). A piper was there – we were unclear why – but he had had a few libations and started chatting up Dorothy Swinson, a tutor, who it must be said was not being overly forthcoming. Kath Corbett, another tutor, was very entertained by this but never more so than when it was realised that the piper thought Dorothy was the Madame for all these ‘ladies’ at the table!